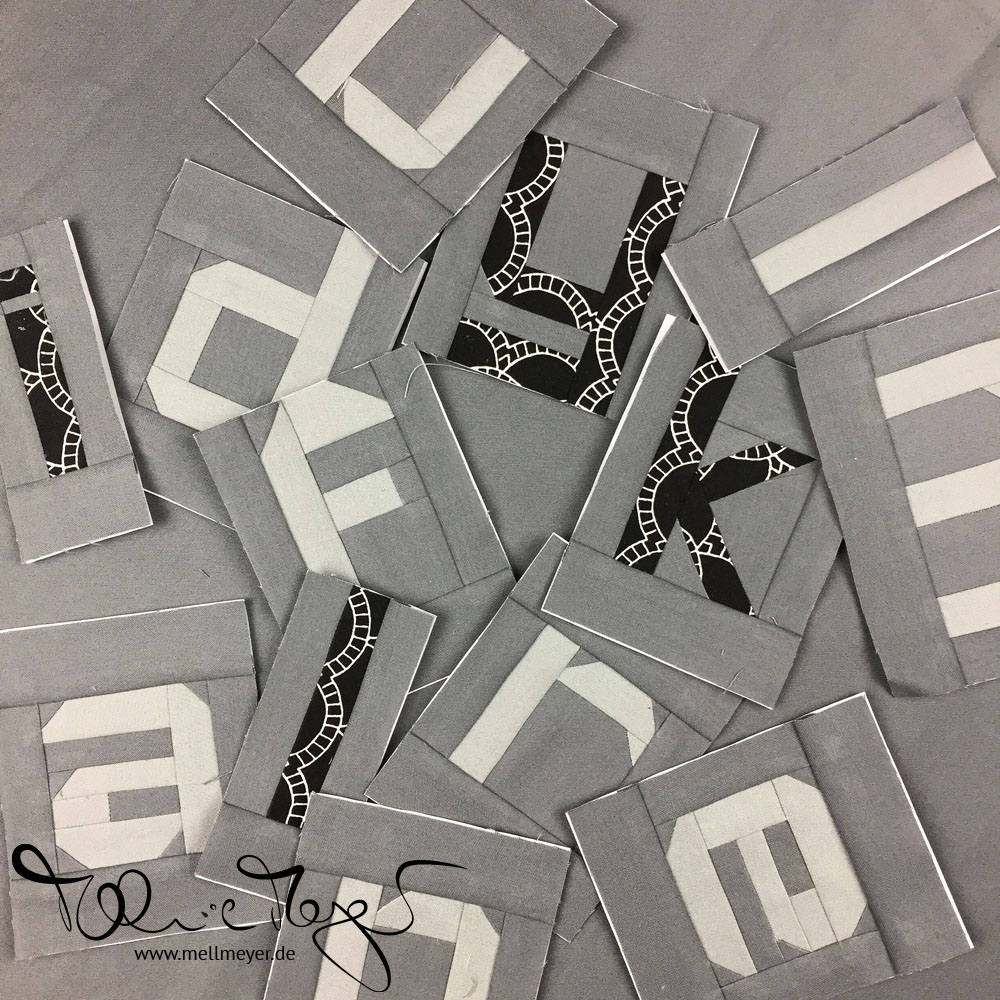 No. 10 of my Finish Along List for Q4 is finished!

Ok, there is still the binding aka facing missing but my part in this group adventure is done. Besides the next pictures of it will probably be of it hanging at QuiltCon. We already planned a photo shooting with those group members that are flying over. I am very excited…

But from the beginning: About April this year, I knew I would be able to fly over to QuiltCon for the first time – the years before it was neither possible because getting vacation days this early in advance is almost impossible and/or I didn’t have the money. It is an expensive trip: Flight, accommodations and of course if I go there from so far away, I wanted to join a few classes & lectures. So when the time came to snag those, I waited nervously in front of the computer … it all worked out and I was exhilarated!

Shortly after, in the middle of July I started a call for group members for a charity quilt. Wouldn’t it be great to have a quilt in the show? To really be a part of QuiltCon? And the charity challenge is an almost sure way to get in. While getting a quilt to hang in the main show is very, very hard!

At the beginning of August we had our group of eight German quilters. One month later we had decided on a design and divided the tasks. We collected the money and ordered fabric, reordered some more fabric because it wasn’t perfect and then sent it to everyone. We then sewed our “blocks”.

We decided on publishing only sneak peeks on Instagram. Here are the ones of my group members.

The theme for this year’s charity challenge is “text” in a color scheme I’d call greyscale.

While we also pondered women empowering affirmations or quotes, our brainstorming resulted in mostly social themes. A German context would have been “Die Würde des Menschen ist unantastbar.” (Human dignity shall be inviolable.) It is from the ‘Basic Law for the Federal Republic of Germany’ and should be very recognizable here, but probably would mean nothing to our international quilty friends. So we considered the similar phrase of the ‘general declaration of human rights’: All human beings are born free and equal in dignity and rights. They are endowed with reason and conscience and should act towards one another in a spirit of brotherhood.

But really to a point and more memorable is the phrase we decided to put on the quilt:
The humankind needs more kind humans.

We also wanted to emphasize the word kindness. So we decided on a grid layout. Two thirds with our main text and lots of negative space to make it modern and let it breeze. It should be our shining star. That is why we choose a metallic essex linen for those letters.

The last third is a strip over the whole length of the quilt with “all the” translations of the word kindness. Words being serarated by fabric colors not paragraphs or spacing. The words alternate between a grey solid and black printed fabrics.

We started with the languages we could find in our circles of friends – including the nice quilting community. Not wanting to trust google but to talk to native speakers who can try to translate the meaning of kindness. Maybe not picking the closest translation but a more fitting word.

I even tried a customer at my bank who appeared to be fluent in three languages. She was a bit stumped at that time and declined. But what was really sweet is, that she gave a small note to pass on to me to a colleague with all the necessary info. That language didn’t make it into the final selection – as a few others. In the beginning we feared to have not enough options. After a few days of collecting we had way too many :)

The goal was to include languages from different parts of the world and that also indicate different religious beliefs. Those regional and religious conflicts those that could benefit the most from more kindness, tolerance and understanding. And I am happy we managed most of those that came to mind.

The backing was picked with the color yellow in mind – symbolizing happiness, joy, positivity… which came closest to kindness. Also it includes flowers which I think is one basic act of kindness: To hand flowers to a host… Because while those big conflicts are important, we can all include more kindness in our everyday lives! 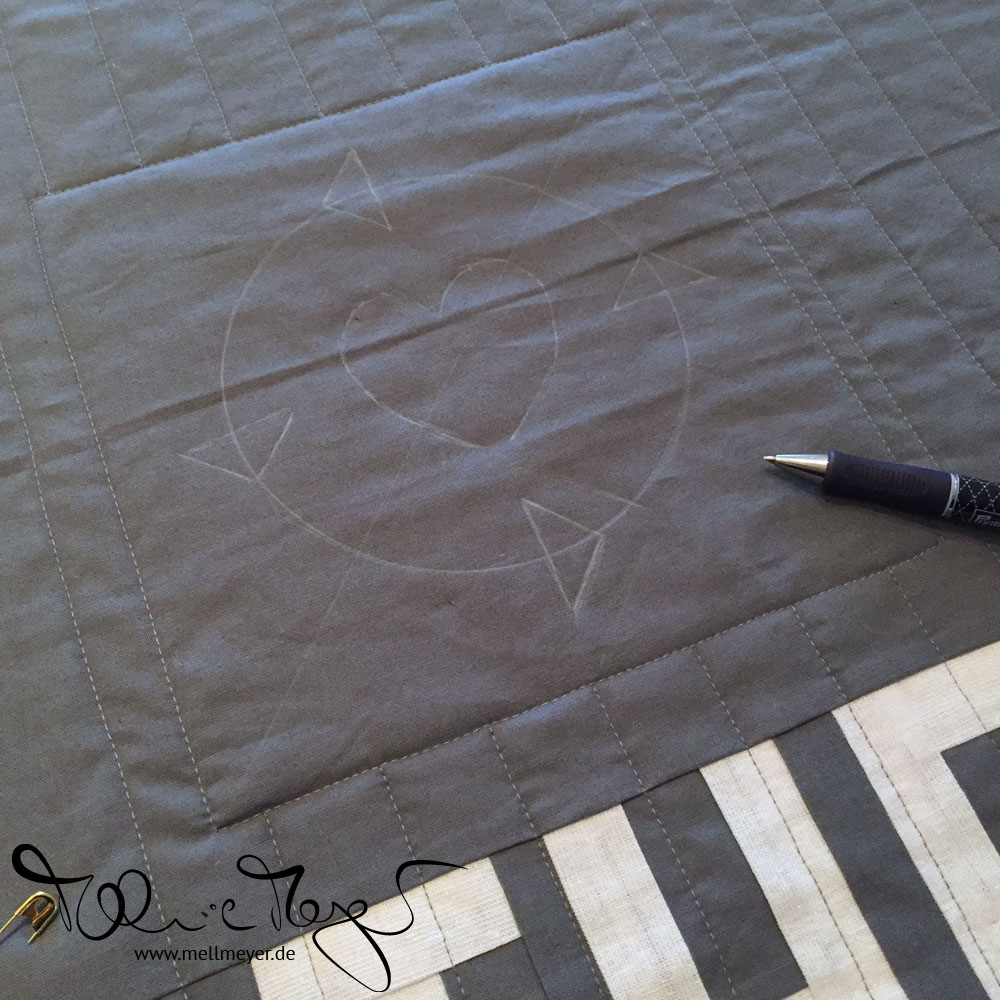 We also included the kindness symbol. It was created by Together Kind an action project started in a Transitional Kindergarten (TK) class in Florida to promote kindness.

So imagine a drumroll…… here is our QuiltCon 2020 Charity Quilt: Yeah! 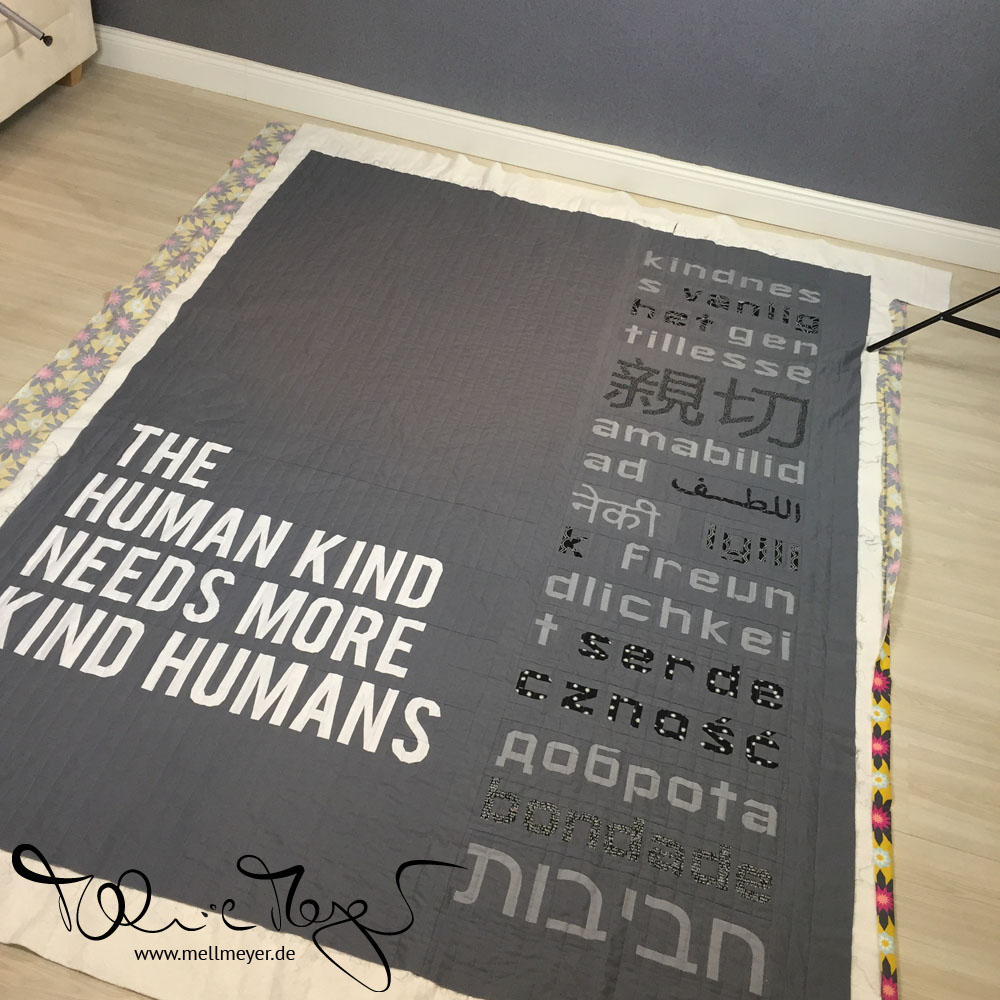 So this is finish number four! Not a “full finish” but the big first part is done – and it is gone from my personal WIP list. I had hoped to also finish something else but I am not so sure anymore. So this might also be the last finish of 2019.

I am looking forward to seeing it in Austin – in 55 days, but who is counting :) 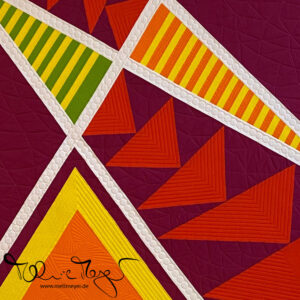 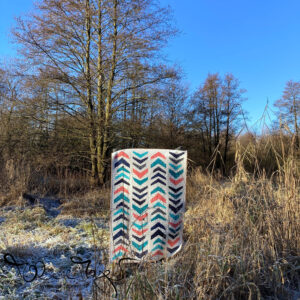